As a part of what was then the Wanganui Carnival, the Wanganui Sports Motorcycle Club decided to run a Motorcycle race on the one-mile (1.6 kilometre) downtown set of roads that in time would become known as the Cemetery Circuit. In those early days the meeting was known as the Christmas Carnival Road Races, when the Carnival folded it became mostly known as ‘Round the Houses’. The big race of the day, the 500cc class, was a thirty-lap race. 500cc may not seem like a big bike in todays terms, in those days they were at the top of the food chain in motorcycle racing world wide.

Sidecars were added in 1952 much to the delight of the crowd, to many this is still the highlight of their day out on Boxing day in Wanganui.

There were no Japanese bikes back then, British bikes dominated the results in the first decade, although local rider Bob Coleman won in 1956 on a German NSU and Auckland’s Peter Stone scored a victory on a Czechoslovakian Jawa in 1959. 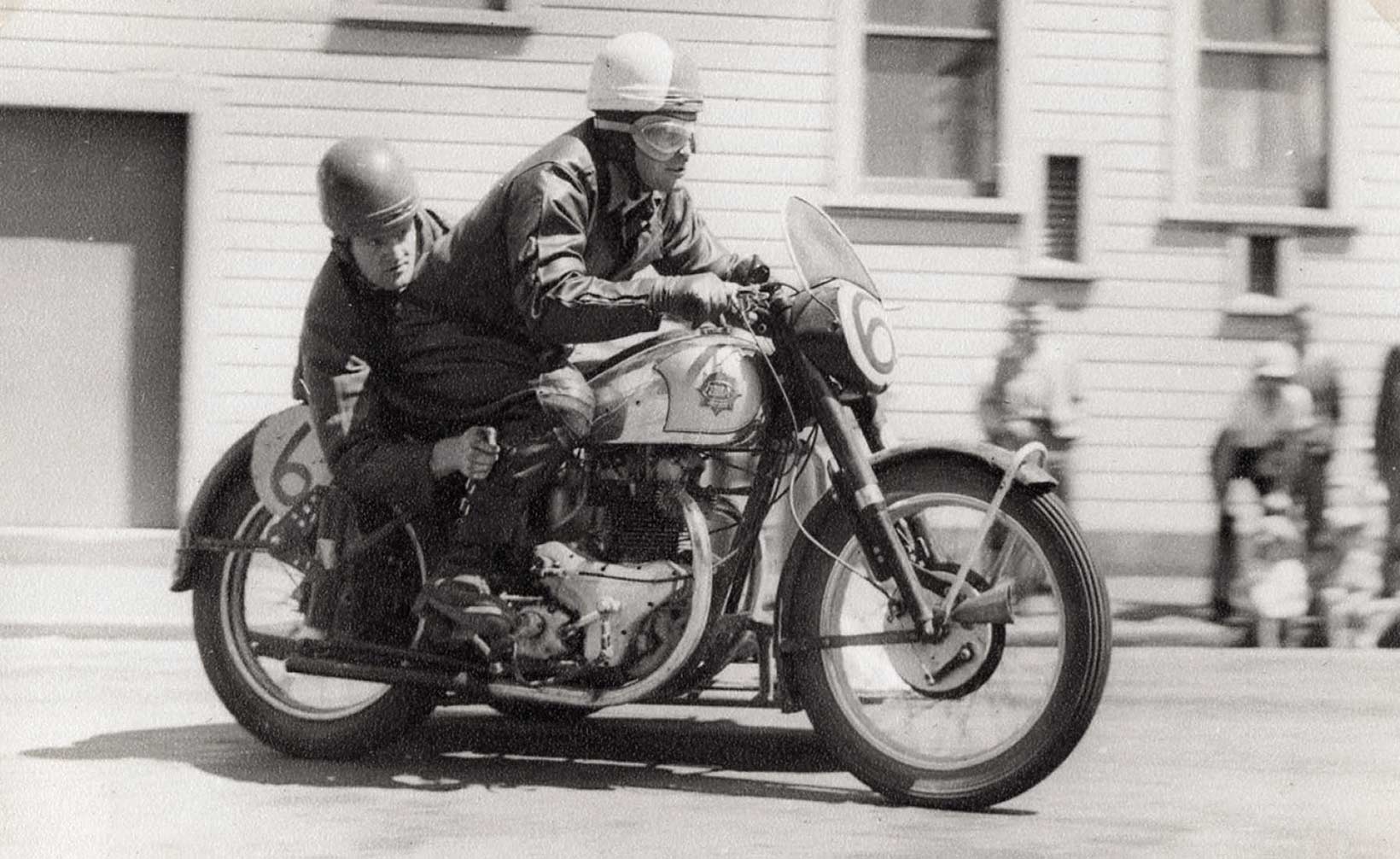 For three years motorcycle racing didn’t run on the Cemetery Circuit, from 1963-1965. It would seem that there was some objection to people blasting full throttle through a cemetery.

So first ‘away game’ was a race around a circuit at Moutoa Gardens, a motocross ran instead of the traditional road race at Christmas 1964, then in 1965 the Matarawa Circuit was brought back into action. This had been used a number of times in the late forties and early fifties, but this time it was ridden clockwise, rather than anti-clockwise as in the olden days.

A welcome return to the Cemetery Circuit in 1966 saw business as usual, although by the end of the decade the British bikes had lost their grip on the trophies. Spanish Bultacos scored victories in both the lightweight 250cc class as well as the ‘Senior’ 500cc race and several Japanese brands were on the money too.

Internationals were now competing on a fairly regular basis. A pair of Australian Sidecar teams rode in the 1962 meeting. Reigning world champion Rhodesian Jim Redman popped over and rode too and at the end of the decade American based British rider Ron Grant came to Wanganui and started something pretty incredible for us all. 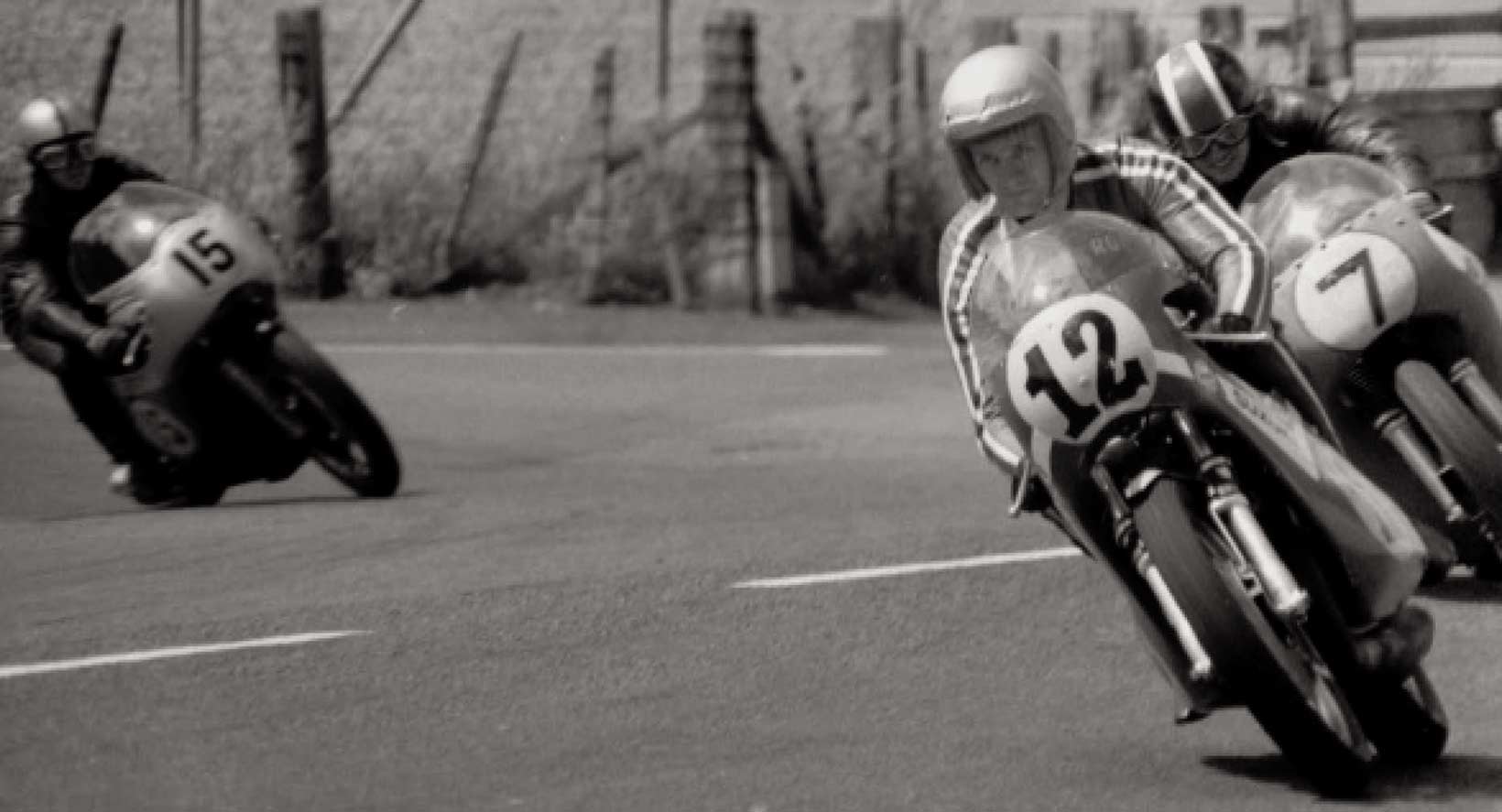 Cigarette sponsorship was huge, and the demographic of the public following the motorcycle racing was pretty much who they were targeting. Backing at the Cemetery Circuit started with Rothmans then we had the Marlboro Series and international competitors flocked here to race. New Zealand’s Suzuki network was based in Wanganui and owned by Rod and Bob Coleman. The Colemans, along with Ron Grant, brought some world leading Suzuki’s to do battle here, and the rest of the world were watching. The northern hemisphere was in it’s winter so there was no racing, just Rolf Harris and his mates to watch on TV.

The new models often made their world wide debut here, if they won, they were the bikes to order for the years racing. The Japanese factories clicked onto this and we had world leading battles right on our home turf for a number of years. American Pat Hennen, a protege of Ron Grant, was the King of the Castle. Don’t think at all that the locals were pushed aside, they were strong and many were noticed by foreign teams and riders helping quite a few launch their international careers.

The golden years of the Marlboro Series were never going to last for ever, the reality was it was a lot of fun to come to New Zealand to race, and the money was good too, but it wasn’t guaranteed. Worldwide riders were demanding and getting start money. It would have been a bridge too far to find the resources to match this, even if Marlboro sponsorship had stuck around.

Meanwhile, in New Zealand, motorcycle sales were at an all time high and production racing became stronger and more popular than classes running pure racing machinery. The formidable Wellington Motorcycle Centre Race Team was hard to beat, but it was challenged by quite a few teams along the way. Cigarette money was gone but hard work by local man Don Cosford saw various major sponsors over time, including Pan Am, Countrywide, Brut 33, Wynns, Taubmans and Suzuki New Zealand.

Suzuki has been loyal and is still at the forefront of the Cemetery Circuit support four decades later in 2020. Thank you Suzuki.

Four two day meetings ran in this decade, with the 1986 and 1987 meetings having a staggering thirty-five races each, featuring live television coverage.

Wanganui built bikes were winners here too. The Steve Roberts built monocoque machines, including the ‘Plastic Fantastic’ cleaned up the big races, and later in the decade the Roberts built Sidecar took several wins driven by Wellington’s Andy Kippen. Robert Holden had his first win on the Wanganui Circuit in 1982. Classics and Bears also became regular classes during the meetings in this decade. Two meetings were run in June, 1988 and 1989. 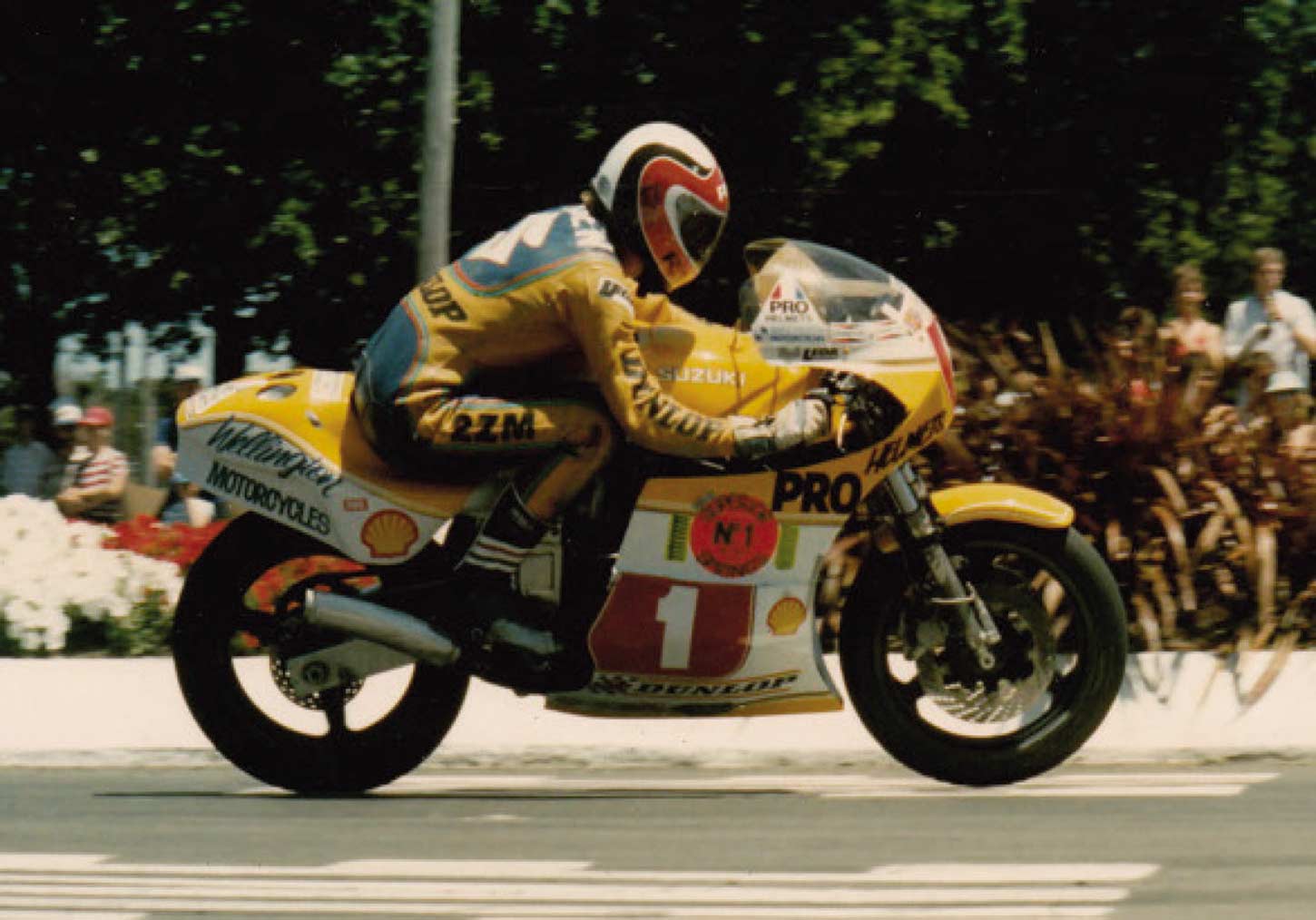 New Zealand Championship points races at Wanganui came to an end – but it was a good thing. Running a points meeting required certain protocols to be followed like minimum race distances and it could have led to compromising other classes and their rides should the day turn wet or something else crop up.

Several containers of sidecars from Australia came over for the Boxing day meeting, in the mid nineties, competitors from this sojourn kept coming back here for well over a decade. The ‘Battle of the Streets’ series started in this era too, with other circuits including Gisborne, Paeroa and Wellington’s Lambton Harbour being part of these series along the way.

The winningest rider on the Circuit, Robert Holden, died in a practice race at the Isle of Man T.T. He won forty-seven races here, placed second and third twenty-two times each. In 1996 the Robert Holden Memorial Trophy was first run, and to this day is the most coveted Road Racing trophy in New Zealand outside the NZ Championship Trophy.

The Kiwi built Britten wowed the crowds. Manawatu’s Jason McEwen scored victories riding them, and had many wins on other brands too. 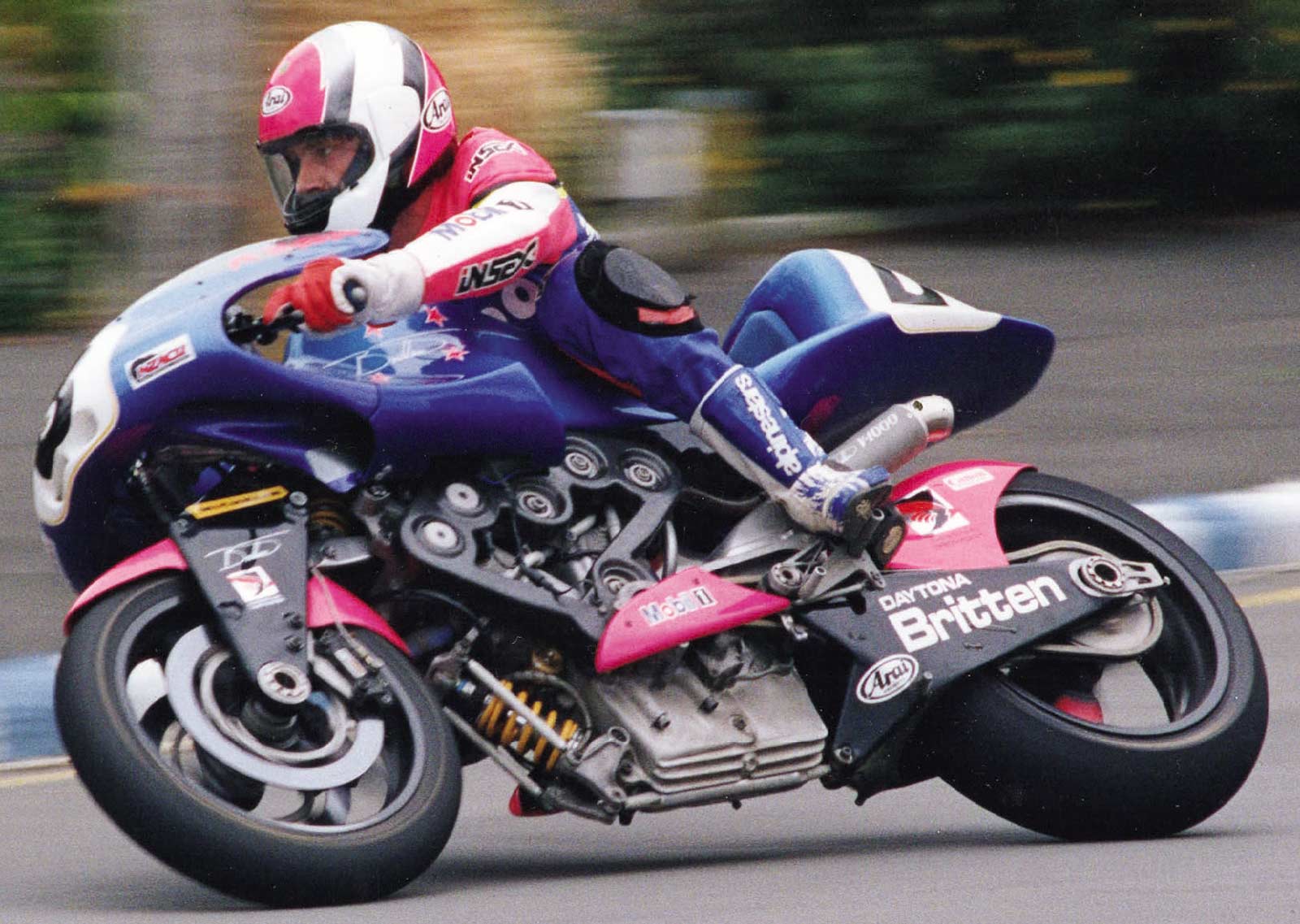 Super Motards came along and thrilled the crowd with their sliding into the corners. In 2006 and 07 an off road section was added for this class part way along Taupo Quay. They ran two classes, up to 450cc and over. Opinions were divided as to whether this was the right thing to do, whatever your thoughts, it proved the management weren’t scared to try something different.

The 50th anniversary of Street Racing in Wanganui ran in 2002, practice for this was a couple of hours on Christmas day. There was a packed program the next day, including races for past Solo and Sidecar riders to have another shot. The old sidecars were such a hoot for the teams and the crowd that the Classic Sidecars were added to the programme, and Super Motard dropped to just one race.

International riders still came in on a consistent level and in 2010 Australian rider Dan Stauffer won the Robert Holden Memorial race, in doing so he became the first rider to win the feature race of the meeting on their first visit in forty-one years. Ron Grant was the last rider to achieve that way back in 1969.

Spectators could now cross the track at anytime thanks to a container bridge across the Esses, and a large ‘TV’ screen meant they could watch the races all around the circuit live too. The Suzuki Tri Series was instigated and is arguably more popular than the NZSBK national championship series for many. 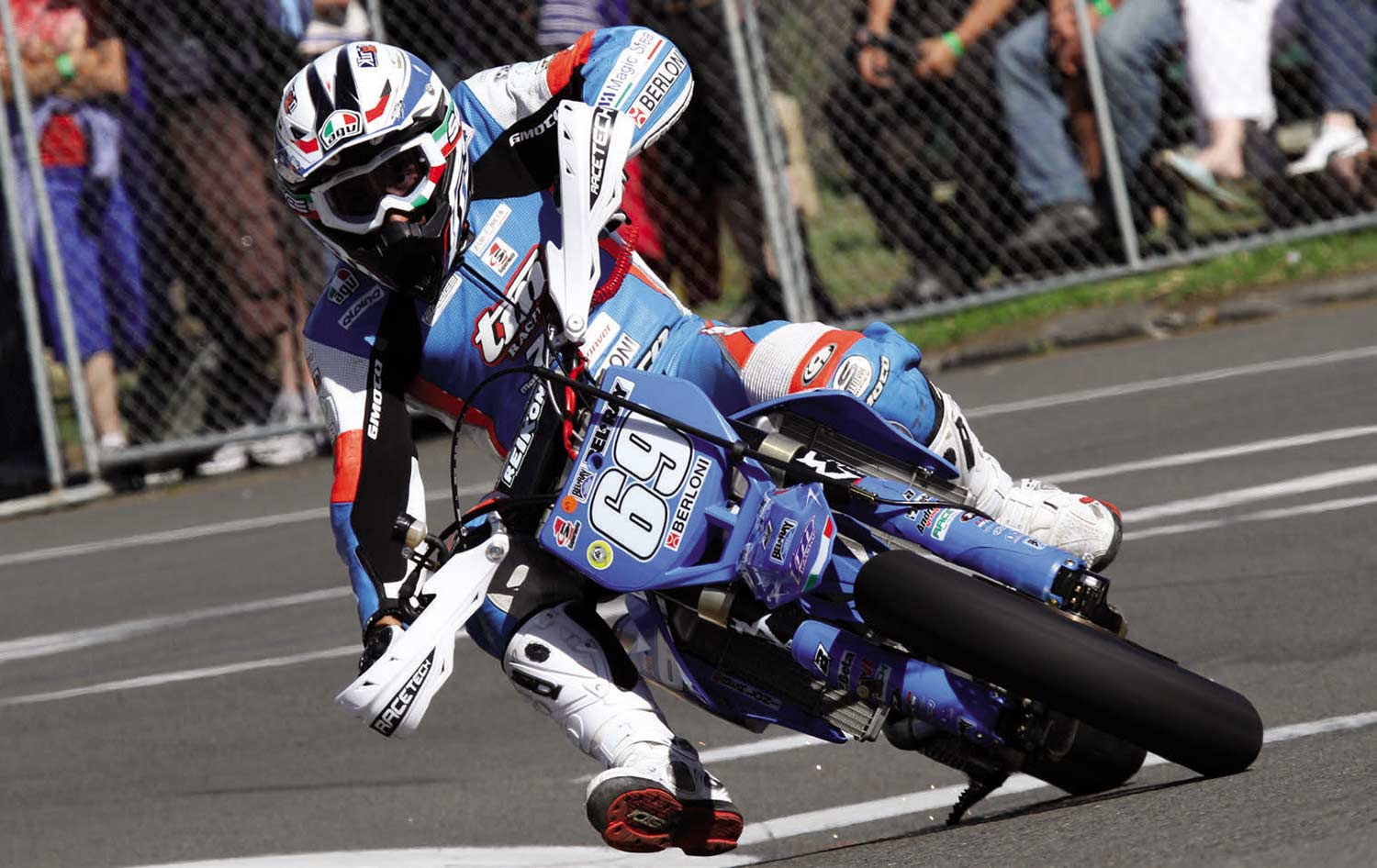 The Suzuki Series went from strength to strength. Unlike several earlier series where Wanganui had just been one of the organising clubs, three meetings were all run from the city by the same dedicated team. The ‘Tri’ from the title was dropped after the 2012 meetings, too many people referred to it as simply the Tri Series, neglecting to acknowledge Suzuki for their support, hence the change.

English media Celebrity and road racer Guy Martin had snuck into the Cemetery Circuit the previous decade almost unnoticed, that was before he became famous. This decade saw him return twice, setting a lap record in the Classic Racing class, along with Guy there has been a steady stream of northern hemisphere ‘Roads’ experts. Austrian Horst Saiger came over no less than four times. Others include multi times world champion Sidecar Driver Tim Reeves and Isle of Man T.T. lap record holder Peter Hickman. Hickman managed to win the Robert Holden Memorial event despite Scotty Moir setting a new outright lap record by over a quarter of a second on the day. Moir had the race well under control and backed off on the last two laps inadvertently letting Hickman slip through.

A large contingent of sidecars from Perth Australia came over in 2018 as well as French Sidecar pilot and top ten Isle of Man competitor Estelle le Blond on her Formula Two machine. Japanese rider Yoshi Kishimoto brought the first Electric Motorcycle to the tracks of New Zealand straight to the Cemetery Circuit. He led the Formula Three race at one stage, until a red flag saw it restarted.

Sadly in 2020 due to Covid-19 there would be no Internationals at the 70th meeting but the racing will be just as strong. Kiwi riders aren’t second rate by any means, and the Cemetery Circuit no walk in the park either. Internationals have won the feature race here just ten times, an average of about once every seven years. 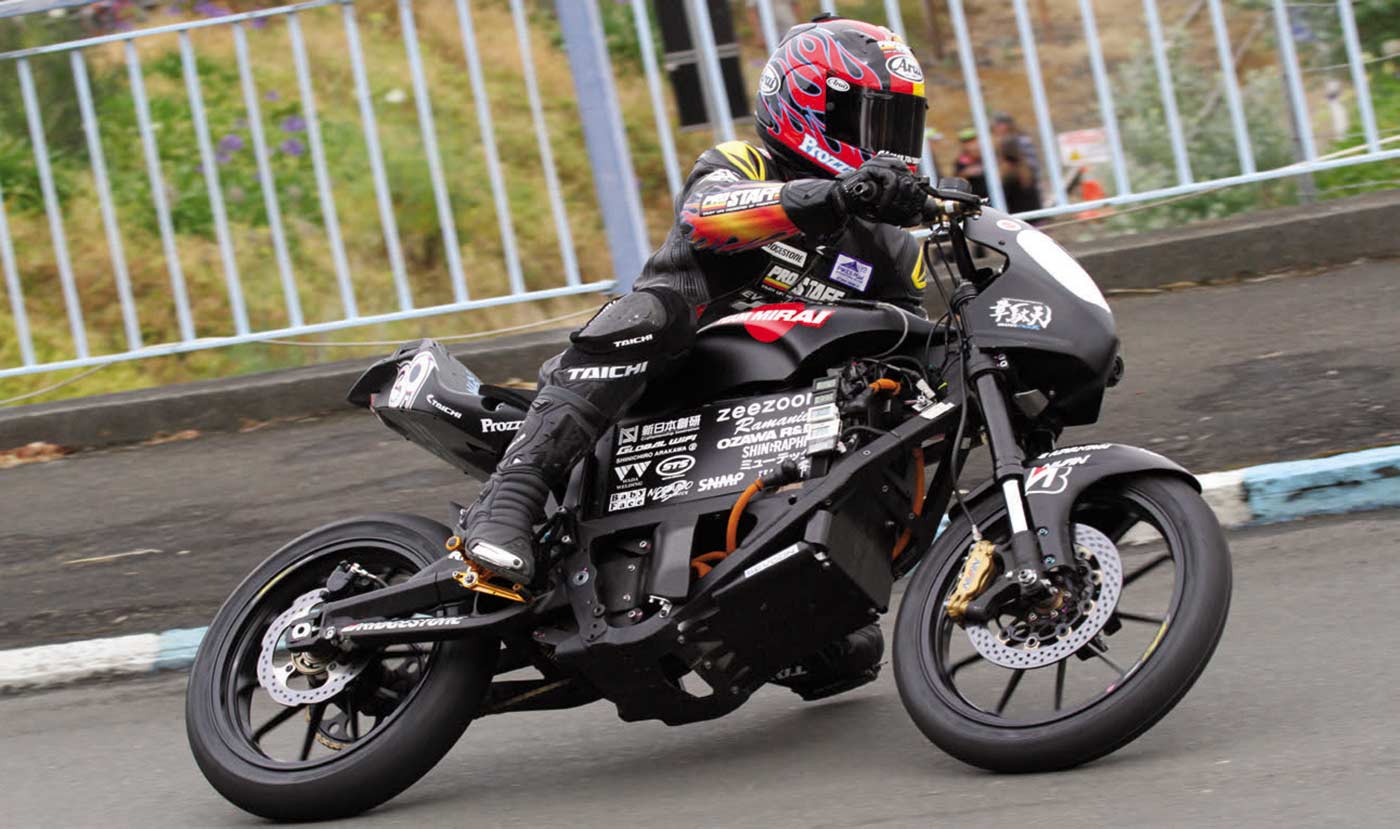