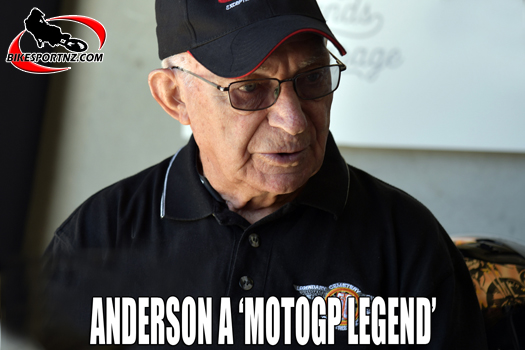 He’s already a legend to us here in New Zealand and in many other parts of the world too, but Hamilton’s Hugh Anderson is set this year to officially become the world’s first Kiwi “MotoGP Legend”.

A four-time world road-racing champion and a New Zealand road-racing and motocross champion too, the now 86-year-old, originally from Huntly, is to be lauded as a MotoGP Legend.

Fellow former MotoGP stars Jorge Lorenzo, from Spain, and Italian Max Biaggi have been confirmed as inductees into the MotoGP Hall of Fame this season as well.

As restrictions ease in many places, a new date has now been set for each ceremony. As originally planned, Lorenzo will be inducted at the Circuito de Jerez-Angel Nieto on April 29, with Biaggi up next at the Autodromo del Mugello on May 27.

New Zealand’s Anderson is set to be inducted at the 2022 Australian GP at Philip Island, the 19th round of 21 in this MotoGP season, on October 14. 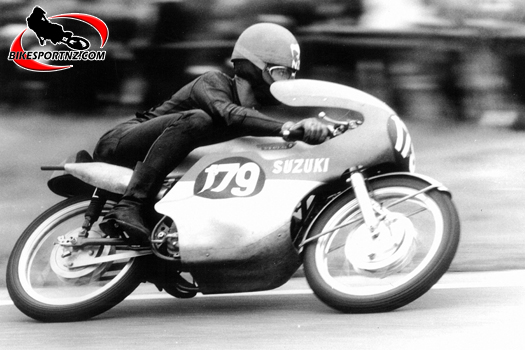 Anderson was naturally delighted with the news.

“I was in correspondence with all these people before the Covid thing turned up and there had been emails floating about, but I hadn’t been told (I was to be inducted),” Anderson said.

“My sole pleasure and reward (in racing) was just from the enjoyment of riding a motorcycle. The money and trophies turned up and I thought that was good, but it was the extreme pleasure of winning these races, and being able to ride at the level required to beat the best in the world, that I got the most satisfaction from. That’s where I got my kicks, because you were on the edge the whole time.

“I thought and schemed on how I could improve this or that and ride better and it all worked out pretty well,” he said modestly.

“I’m certainly looking forward to my trip to Australia. I had been teetotal for a long time in my career, although in later years I did enjoy the odd drink, but it’s a nuisance now that I can’t drink alcohol. I can’t touch the stuff. It would have been nice to have a few beers,” he chuckled.

Growing up in Huntly, Anderson played rugby league for Huntly United, alongside fellow future motorcycle champion Ginger Molloy, and he first rode a motorcycle on his mother’s farm when he was aged nine.

At the age of 17 he rode in his first dirt bike event on a self-made machine.

He was soon winning races with the same determination that was later to take him to many international victories and, by 20 years of age, he was doing the same with road bikes on the tarmac.

He joined the Suzuki factory team in 1961, racing the factory’s 50cc and 125cc bikes, and occasionally he competed in 250cc races for them too.

During his stint with the factory team, Anderson was double world champion (50cc and 125cc) in 1963 and retained his 50cc world title the following year. In 1965, he was crowned 125cc world champion.

Anderson was believed also to be instrumental in helping Polish-born German rider Ernst Degner win the 50cc world title for Suzuki in 1962.

“I could have won more (than four) world titles, but Suzuki was a bit behind the eight ball at that time. Without me they possibly wouldn’t have won any titles in that time period. With me they won five. I won four, but the fifth one they would not have won without me.

“Ernst Degner won the title for Suzuki (in 1962) … I don’t know why the other guys fell off,” said Anderson with a mischievous laugh.

“A couple of Ernst’s rivals were faster than him, but I was going faster than all of them. It was about lap 18 of the 25-lap race when I thought I should do something about this (to help Ernst) and I slowed up a bit … Ernst’s rivals lost their concentration or something … one guy fell off and the other guy overshot a corner. They had a couple of big Germans in their team, but they never came to talk to me afterwards,” he said.

Anderson’s last race for the Suzuki factory was at the 1966 Japanese Grand Prix at Fisco in October 1966, at the age of 30.

Anderson switched back to racing off-road bikes. He was offered a contract by Suzuki to race their motocross machines, which he turned down, choosing instead to be a development rider for the factory.

He subsequently decided to take on the international motocross circuit in Europe riding CZ machines, finishing in the top four positions in more than 40 races. He continued at home in New Zealand and was a multi-time New Zealand motocross champion before retiring again in 1973, then aged 37.

A hard man to tie down, Anderson was soon again active on race tracks in the 1970s and 80s and, in 2008, Anderson set his fastest ever lap around the Pukekohe road race circuit, then aged 72.

That’s highly-esteemed company in anyone’s reckoning and a famous group to which this Kiwi most certainly belongs. 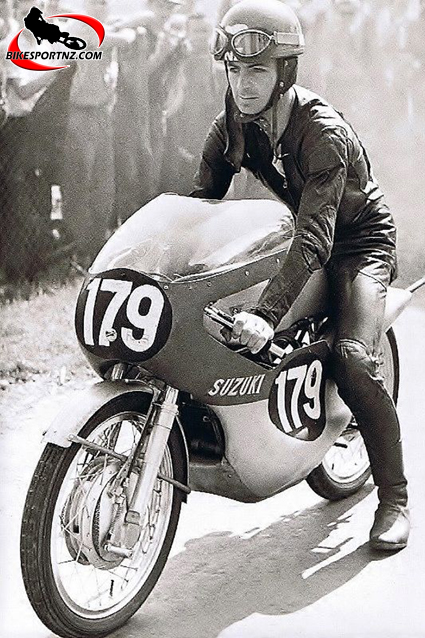